The certificate of death for John W. Donaldson (1897-1946). John was admitted to the Veterans Administration Hospital in Kerr County, Texas, on February 9, 1946, for tuberculosis treatment. After arrival at the hospital, he suffered a cerebral thrombosis and was pronounced dead at 10pm on February 11 at the age of 48. Other information provided on the document included his parents' names and his marriage status.

John W. Donaldson (1897-1946) was born on September 8, 1897, to John F. and Hattie Donaldson in Waldo, Florida. He enlisted in the United States Army in March of 1918, at the age of 20, and was assigned to the Motor Transport Corps of the 5th Division. John trained at Camp Johnston in Jacksonville, Florida, before leaving for New Jersey, where he set sail aboard the USS America on June 10, 1918, and arrived at Brest, France, on June 19, 1918. He spent some time at Camp Pontanezen, a crowded rest camp, where soldiers performed construction work. In France, John served as a chauffeur in the Meuse-Argonne Offensive. During the intense six-week battle, John sustained shrapnel wounds on his left knee and burns on his neck. Before being honorably discharged on May 3, 1920, he rose to the rank of Sergeant Major, the highest rank for a non-commissioned officer. Donaldson returned to Florida after discharge, where he married Archie K. Hughes in 1924, in Winter Haven. In 1929, they had a son named Delbert. The couple divorced in 1931. He visited VA hospitals in North Carolina and Bay Pines, Florida, for tuberculosis treatment. On April 10, 1937, John married again to Lillie May Holloway, but they divorced some time after. John was admitted to the VA hospital in Kerrville, Texas, on February 9, 1946, and died two days later due to cerebral thrombosis. He rests in Bay Pines National Cemetery at Section 11, Row 2, Site 13.

Originally created and published by the Texas Department of State Health Services. 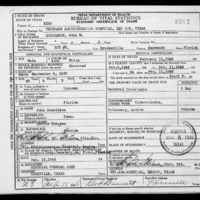