A newspaper clipping from the Saint Petersburg Times, entitled "Theodore R. Howard." The notice displays a photograph of Howard and reports that he graduated from the United States Naval Training School at Hampton Institute in Hampton, Virginia, on February 24, 1944. The article also acknowledges his older brother, Thomas, who at the time served in the Army Quartermaster Corps as a Master Sergeant in India.

Theodore and Thomas's father was Jeff Howard (1894-1962). Born and raised in Alachua, Florida, Howard's parents, Cage and Rachael Howard, worked as farmers. Before being drafted into the military during World War I, Jeff relocated to Clearwater, Florida, while working as an itinerant laborer on the Southern Railway Company in Marion, North Carolina. On January 16, 1918, Jeff married Francis Davis, and the couple welcomed their first son, Thomas Jefferson Howard, on July 1, 1918. After being drafted into the United States Army on July 18, 1918, Jeff eventually joined the 807th Pioneer Infantry. Serving overseas in France, Jeff and his unit served in a technical capacity, constructing and repairing roads, bridges, and railroads. However, the units also served on the front lines of battle, experiencing direct action with the enemy. Jeff and the 807th took part in the Meuse-Argonne Offensive, the last major engagement of the war, earning the Silver Band on the Pike of Colors of Lance of the Standards. Returning from overseas, Jeff settled briefly in Clearwater, working as a grove worker. During the 1920s, the family relocated to New Jersey, where a second son, Theodore Roosevelt Howard, was born on November 19, 1923, in New Brunswick. By 1930, the family returned to Clearwater, where Jeff continued working in the grove industry for the remainder of his working life. Both of his sons served in the military during World War II. Thomas served in the Army, while Theodore served in the Navy. Jeff died on August 29, 1962, and is buried in the Bay Pines National Cemetery in St. Petersburg, Florida, at Row 39, Plot 5.

Copyright to this resource is held by the St. Petersburg Times and is provided here by RICHES for educational purposes only. 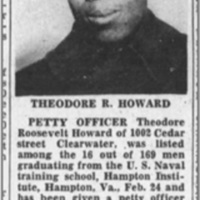