The Twelfth United States Census records for Alachua County, Florida, for 1900. The census divides the population by sex, race, age, marital status, number of children, occupation, literacy, whether they owned or rented, farm or house. The census also states a resident's place of birth, and birthplace of their mother and father. If foreign born, the person provided the year they immigrated, whether they were naturalized and if they spoke English.

A notable resident listed in this record is Jeff Howard (1894-1962). Born and raised in Alachua, Florida, Howard's parents, Cage and Rachael Howard, worked as farmers. Before being drafted into the military during World War I, Jeff relocated to Clearwater, Florida, while working as an itinerant laborer on the Southern Railway Company in Marion, North Carolina. On January 16, 1918, Jeff married Francis Davis, and the couple welcomed their first son, Thomas Jefferson Howard, on July 1, 1918. After being drafted into the United States Army on July 18, 1918, Jeff eventually joined the 807th Pioneer Infantry. Serving overseas in France, Jeff and his unit served in a technical capacity, constructing and repairing roads, bridges, and railroads. However, the units also served on the front lines of battle, experiencing direct action with the enemy. Jeff and the 807th took part in the Meuse-Argonne Offensive, the last major engagement of the war, earning the Silver Band on the Pike of Colors of Lance of the Standards. Returning from overseas, Jeff settled briefly in Clearwater, working as a grove worker. During the 1920s, the family relocated to New Jersey, where a second son, Theodore Roosevelt Howard, was born on November 19, 1923, in New Brunswick. By 1930, the family returned to Clearwater, where Jeff continued working in the grove industry for the remainder of his working life. Both of his sons served in the military during World War II. Thomas served in the Army, while Theodore served in the Navy. Jeff died on August 29, 1962, and is buried in the Bay Pines National Cemetery in St. Petersburg, Florida, at Row 39, Plot 5.

Originally created by Benjamin Rush and published by the United States Census Bureau. 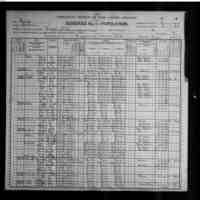 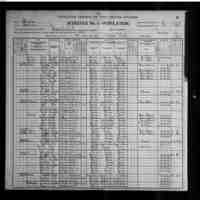