United States Army Base No. 117 in LaFauche, Haute-Marne, France. The hospital was used to specifically treat psychiatric ailments, such as shell shock. Shell shock, known today as Post-Traumatic Stress Disorder (PTSD), was a complex diagnosis relating to psychological war-related trauma. Originally, it was thought that a physical explosion from a shell caused the disorder, but as many cases of shell shock came in, it became clear that the disorder was the result of a range of traumatic emotional experiences.

A notable soldier who served at the hospital was Jane "Jennie" Margaret Gadde (1888-1963). Gadde was born on August 17, 1888, in Ludington, Michigan. The second oldest of four sisters, she was born to immigrant parents, Nels and Carrie Gadde. The family lived in Ironwood, Michigan, where Gadde’s father worked as a foreman and her mother raised her and her sisters. The family moved in 1905 to Sanborn, Wisconsin. Gadde went to school at the Ferris Institute in Big Rapids, Michigan, and earned a degree in shorthand in 1907. She then worked as a stenographer for a building contractor. After a few years, Gadde changed professions, training as a nurse at the Illinois Training School for Nurses, where she graduated in 1915. She enlisted in the United States Army Nursing Corps in October of 1918. She trained at the United States Army Camp Base Hospital at Camp Mead, Maryland, where she was assigned to a psychiatric unit. She embarked from the United States to France in November 1918, serving as a nurse for roughly eight months in a psychiatric unit. She returned to the United States in August 1919, and was honorably discharged from service shortly thereafter. She returned to Chicago after the war, working in the Cook County Public Hospital until 1942. She enlisted again as a nurse in the Nursing Corps during World War II. She worked at Gorgas Hospital in the Panama Canal Zone until 1947, returning home and again being honorably discharged. After the war, Gadde moved to St. Petersburg, Florida, and volunteered for the Delano American Legion Post #122. She was also involved with the Panama Canal Society in Florida in the 1950s. Gadde passed away in September 1963, and is buried in the Bay Pines National Cemetery.

Originally created and published by the United States Army 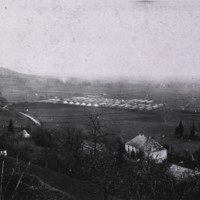