The draft registration card for Phillip Kenneth Winter (1898-1945). The card contains the demographic information for the soldier including name, telephone number, age, place of birth, date of birth, name and address of person who will always know your address, employer's name and address, place of employment, race, height, weight, eye color, hair color, and complexion. The reverse side of the card lists his physical features, noting that he had scars on his right hand and right foot.

Born on December 24, 1898, in Baltimore, Maryland, to Phillip and Mary Rose Winter, Phillip was the seventh of eight children. Sometime after 1900, the family moved to Jacksonville, Florida, where Phillip eventually found work as a messenger for a railroad company. He enlisted in the United States Navy on April 14, 1917, in Atlanta, Georgia, and first served in Norfolk, Virginia, before serving on the USS Orion in June 1917. In July 1918, Phillip transferred to the USS Helvetia (SP-3096), a tender/decoy ship which failed both of its missions in August and September of 1918. After the war ended, Phillip returned to Jacksonville, where he resumed work in the railroad industry and met his future wife, Mary Jeanette "Janie" Roberts. They married on August 15, 1921. Mary gave birth to their daughter, Martha Rose, on August 5, 1922. Mary passed in 1925 due to tuberculosis. Phillip remarried on July 27, 1929, to Harriett Rhynard, but they divorced in 1934. Sometime after, Phillip moved to Clearwater, Florida. In April 1942, Phillip registered for the World War II Young Man's Draft but was not called into service. He worked as a member of the barracks in the area. He passed away on December 22, 1945, two days before his forty-seventh birthday. He is buried in the Bay Pines National Cemetery at Section 11 Row 1 Site 10. 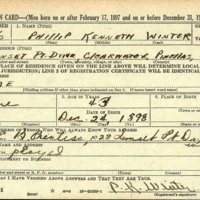 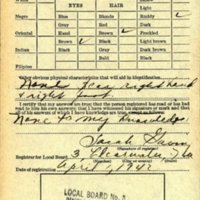