The second USS Harding (DD-625) was launched on June 28, 1942, by the Seattle-Tacoma Shipbuilding Corporation and commissioned by the United States Navy on May 25, 1943. The Harding served as a ship destroyer responsible for antisubmarine patrolling and escorting battleships in the Atlantic earlier during World War II before transitioning to the Pacific in the later part of the war. The Navy decommissioned the ship on November 2, 1945, and was sold for scrap on April 16, 1947, by the Luia Brothers Co., Inc. of Philadelphia. Harding received three battle stars for World War II service.

A notable crewmember was George Downings Jr. (1925-1946). Downings was born and raised in St. Johns County, Florida. Before joining the military, he lived in Saint Augustine, Florida. On March 4, 1943, Downings enlisted in the United States Naval Reserve in Jacksonville, Florida. Downings served as a Navy Messman, later called a Steward. In his duty, Downings was responsible for feeding and cleaning up after Navy officers. He eventually reached the rank of Steward’s Mate First Class. Downings served on various vessels, including the U.S.S. Harding, the U.S.S. O’Brien, and the U.S.S. Moale. Downings continued to serve in the Navy until December 25, 1945. He passed away on July 5, 1946, at the age of 21. He is buried in Saint Augustine National Cemetery in Section D, Plot 57. 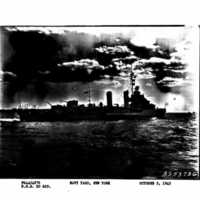