The Fifteenth United States census records for St. Johns County, Florida, for 1930. The Census divides the population by categories of Name, age, sex, race, marital status, occupants and relation to head of house, whether the home is owned or rented, value of home or rent, whether home is a farm residence, whether the home has a radio, college attendance, literacy, birthplace and birthplace of parents, citizenship status, language spoken before coming to United States, year of immigration, occupation or business, class of worker, whether worked the previous day, military status, and war or expedition participated in.

A notable resident listed in this record is George Downings Jr. (1925-1946). Downings was born and raised in St. Johns County, Florida. Before joining the military, he lived in Saint Augustine, Florida. On March 4, 1943, Downings enlisted in the United States Naval Reserve in Jacksonville, Florida. Downings served as a Navy Messman, later called a Steward. In his duty, Downings was responsible for feeding and cleaning up after Navy officers. He eventually reached the rank of Steward’s Mate First Class. Downings served on various vessels, including the U.S.S. Harding, the U.S.S. O’Brien, and the U.S.S. Moale. Downings continued to serve in the Navy until December 25, 1945. He passed away on July 5, 1946, at the age of 21. He is buried in Saint Augustine National Cemetery in Section D, Plot 57. 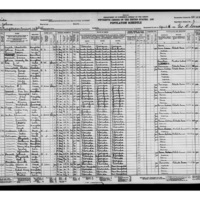