The draft registration card for John Martin Conaway (1892-1955). The card lists a serial number, the name of the registrant, the order number, the place of residence, the mailing address, telephone, age, place of birth, state, date of birth, the reference and their address, their employer and place of employment. The Fourth Registration, better known as the Old Man’s Draft, was for men between the ages of 45 and 64 years old, who were not already serving in the military. Many of these men, including John, were veterans of the First World War. Such a registration was not intended for explicit military service. Rather, it was a way to assess the manpower resources of the United States. From this register, the government could fill the needs of national service by quickly calling up experienced and trained personnel to fill necessary positions. Though he registered, John was not recalled to service.

Conaway was born on September 30, 1892, in Wellsburg, West Virginia. He was the middle of three children born to Glenn and Eliza Conaway. When John was four years old, his mother Eliza passed away. Glenn then married Lenora Cusick. John gained two half-siblings from this marriage. At eight years old, John lost his father and the family split up. By the time he was eighteen, John lived in Michigan. When the United States entered World War I, John enlisted in the Army Air Service. Before deploying, he married Catherine Jeffrey. He served in France with the 803rd Aero Squadron (Repair). John received an honorable discharge in January of 1919. In January of 1920, John re-enlisted into the Army Air Service and rejoined his old unit. He received a second honorable discharge in December of 1921. By 1924, John and Catherine had divorced. John then married Rhoda Spicket. Their son, William, was born in 1925. When the United States entered World War II, John registered for the Old Man’s Draft. In February of 1950, John and Rhoda divorced. John then married Gloria Shields later that year. In 1952, the couple moved to St. Petersburg, Florida. John passed away in 1955 and is interred in the Bay Pine National Cemetery. 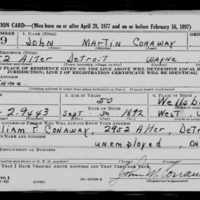