The United States Colored Troops military service record description card for Abraham Lancaster. The card lists major events from a black soldier’s time in the military and when they occurred including enlistment, absences, and hospital visits. 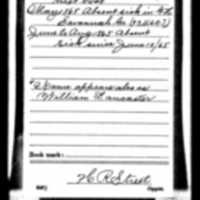