The enlistment record for Abraham Lancaster by the United States Colored Troops on January 12, 1863. The record provided individual information on soldiers including name, age, birthplace, occupation, date of enlistment, and location of enlistment. 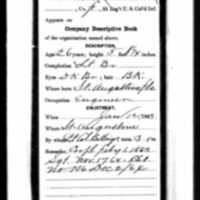