The Freedmen’s Bureau application for William Hewlin. The application provides specific information from his time in the military, including enlistment date and location and muster in and muster out dates. The notes at the bottom of the document indicate that he was a slave upon enlistment and joined the original organization of the First South Carolina Volunteer Infantry. The names of fellow African American Civil War veterans Thomas Hanandos and Martin Nateel appear on the application as well. The Bureau of Refugees, Freedmen, and Abandoned Lands, also known as the Freedmen's Bureau, was established in the War Department by an act of Congress on March 3, 1865. The Bureau was responsible for the supervision and management of all matters relating to refugees and freedmen, and of lands abandoned or seized during the Civil War.

William Hewlin was a runaway slave from Saint Augustine, Florida. On January 12, 1863, Hewlin enlisted into the Company B, First Regiment South Carolina Volunteer Infantry, serving as a Private during the American Civil War. During his time in the military, he was granted an official absence on furlough to marry his wife, Victoria, on February 7, 1864. After the war, he and his wife settled in Saint Augustine, where they had four children: George, John, Cato, and Julia. Hewlin passed away sometime before or during the year 1890, and later was buried in the Saint Augustine National Cemetery in Saint Augustine, Florida, in Section A, Plot 185.

Originally created and published by the Bureau of Refugees, Freedmen, and Abandoned Lands. 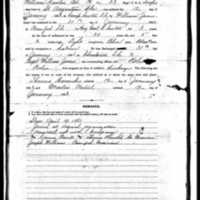