Certificate of Death for Charles Wade, 1938

Certificate of Death for Charles Wade, 1938

The certificate of death for Charles E.T. Wade. The form lists the city, county and state an individual died in, their full name, spouse’s name, race, gender, age, occupation, birthplace and other personal information.

Charles E.T. Wade was born in the West Indies and migrated to Maryland. Before serving in the United States Army, he worked as a laborer. On March 25, 1899, Wade enlisted as a Private in the Company K Ninth United States Cavalry Regiment in Baltimore, Maryland. He served in the Western United States, escorting funds for Native Americans. In the early 1900s, during the Philippine-American War, the Ninth Cavalry was stationed in the Philippine Islands, guarding small villages and military bases. Wade was honorably discharged on March 24, 1902, in Draga, Philippines, and remained there following his service. He married a Philippine woman named Seage Awai Soong and had a daughter, Federica Wade, born in 1910. On July 2, 1935, Wade traveled back to the United States and died three years later on December 10, 1938, in Jacksonville, Florida. He was interned at St. Augustine National Cemetery on December 28, 1938, in section A row 218. 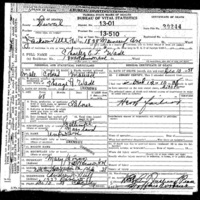