A notable resident listed in this record is William H. Walden. Born and raised in Virgo County, Indiana, Walden married Mary E. Cook in Richmond, Virginia, on November 11, 1884. On November 1, 1892, Walden enlisted in the United States Army, serving as a blacksmith in the Company K Tenth United States Cavalry. This unit travelled to Florida to prepare for deployment to Cuba, but Company K remained in the United States. Walden died on July 17, 1898, from acute peritonitis caused by an incision wound across the chest and abdomen. Originally buried in the Lakeland City Cemetery in Lakeland, Florida, he now rests in the Saint Augustine National Cemetery in St. Augustine, Florida, in Section A, Grave Number 130. 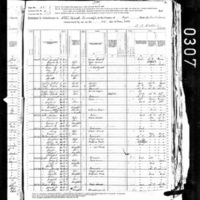