Alterations, since last Return, among the Enlisted Men

Alterations, since last Return, among the Enlisted Men

The alterations, since last return, among the enlisted men of the Company K Tenth Cavalry from July of 1889. The monthly returns were used to report on the strength of each regiment, including total numbers of men present, absent, sick, or on extra duty, as well as happenings during the month. Officers were listed by name, as were enlisted men who were absent, on special duty, or who joined or left the unit during the month. Later returns included strength reports in terms of horses and artillery.

A notable soldier listed in this record is William H. Walden. Born and raised in Virgo County, Indiana, Walden married Mary E. Cook in Richmond, Virginia, on November 11, 1884. On November 1, 1892, Walden enlisted in the United States Army, serving as a blacksmith in the Company K Tenth United States Cavalry. This unit travelled to Florida to prepare for deployment to Cuba, but Company K remained in the United States. Walden died on July 17, 1898, from acute peritonitis caused by an incision wound across the chest and abdomen. Originally buried in the Lakeland City Cemetery in Lakeland, Florida, he now rests in the Saint Augustine National Cemetery in St. Augustine, Florida, in Section A, Grave Number 130.

Originally created by Hunt, Levi P. and published by the United States Army. 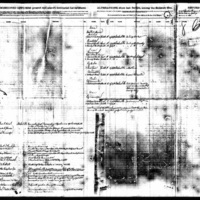