An engraved image of Second Lieutenant Robert Rich Mudge from an 1868 family history book entitled "Memorials: Being a Biograpbical and Historical Account of the Name of Mudge in America". He is estimated to be about twenty-five years old in this image.

Robert Rich Mudge was born in Lynn, Massachusetts, in 1810. He applied to the United States Military Academy (USMA) at West Point, New York, three times before he was accepted in 1829. He graduated as a brevet second lieutenant four years later. In September of 1835, as a full second lieutenant, he deployed to Florida to serve in the Second Seminole War (1835-1842). Mudge served with Company B of the 2nd Artillery Regiment and fell during Dade’s Massacre on December 28, 1835. 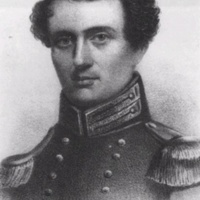