A pillar honoring the place where Second Lieutenant Mudge fell during Dade’s Battle. The area is now a part of Dade Battlefield State Park in Bushnell, Florida. On June 13, 1842, as a prelude to the formal ending of the Second Seminole War, Col. William Worth announced that the remains of the officers who fell in the war would be gathered and reinterred in the burial ground next to the St. Francis Barracks in St. Augustine, Florida.

Robert Rich Mudge was born in Lynn, Massachusetts, in 1810. He applied to the United States Military Academy (USMA) at West Point, New York, three times before he was accepted in 1829. He graduated as a brevet second lieutenant four years later. In September of 1835, as a full second lieutenant, he deployed to Florida to serve in the Second Seminole War (1835-1842). Mudge served with Company B of the 2nd Artillery Regiment and fell during Dade’s Massacre on December 28, 1835

Copyright to this resource is held by Amy Giroux and is provided here by RICHES for educational purposes only. 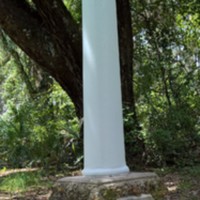