Newspaper sectional on the upcoming entertainment showings at the Milane Theatre for the week of July 19, 1926. Shows included Old Loves and New, The Little Irish Girl, The Fighting Heart, Sweet Daddies, and The Greater Glory.

Copyright to this resource is held by Sanford Today and is provided here by RICHES of Central Florida for educational purposes only.

OLD LOVES AND NEW
(Advance Notice)
Marion Fairfax, screen writer and producer, ushered in the first picture made by herself with a christening. The picture is "Old Loves and New," which comes next Monday to Milane Theater.
Although appropriate, the christening was merely a happy movie coincident, "Old Loves and New," which is Miss Fairfax's adaption of the celebrated E. M. Hull novel, "The Desert Healer," opens with a christening ball in Carew Castle, England, in honor of an heir born amid the strife of the late war.
Lewis Stone has the rule of Lord Carew, who, following the wreck of his home, wanders off to join the nomads of Algeria. In the opening sequence with Stone is Katherine McDonald, who is returning to the screen in her first big role. Others in the cast are Barbara Bedford, Tully Marshall, Walter Pidgeon, Ann Rork, Arthur Rankin and Albert Conti.

THE LITTLE IRISH GIRL
(Advance Notice)
Dolores Costello, who skyrocketed to stardom after her screen debut as the leading woman for John Barrymore in "The Sea Beast," will be seen in her new Warner Bros. picture. "The Little Irish Girl," at Milane Theater Tuesday.
"The Little Irish Girl" is founded on C.D. Lancaster's story, "The Grifters," meaning crooks who are a sort of cross between grifters and lifters. The Irish girl is one whose come-hither looks are exploited by a gang of city grifters who are operating in a small country town. The story is a mystery-comedy of rural wit matched against city slickness.
The screen version was written by Darryl Francis Zanuck, and the production was directed by Roy Del Ruth. The cast includes John Harron, Matthew Betz, Lee Moran, Gertrude Claire, Joseph Dowling, Dot Farley and Henry Barrows.

THE FIGHTING HEART
(Advance Notice)
Surrounded by an excellent supporting cast, george O'Brien comes to the Milane's screen Saturday in John Ford's latest picture for William Fox, "The Fighting Heart," based on Larry Evan's story "Once to Every Man." It is one of the finest things this young William Fox player has done on the screen.
If Larry Evans were writing a special screen story for George O'Brien, he could not have done better than "Once to Every Man." Besides having pathos, humor and dramatic situations, the story gives O'Brien an opportunity to appear in three distinct phases of life into which he fits admirably. O'Brien appears first as a country boy. He goes to the city and is later seen as a prize fighter. In this phase of the story his remarkable physique and boxing ability show to great advantage. Then he appears as the well groomed habitue of /broadway's gilded palalces.

SWEET DADDIES
(Advance Notice)
Charlie Murray, the famous half of the vaudeville team, Murray and Mack, does another of his inimitable portraits of an Irishman in trouble in M.C. Levee's First National picture, "Sweet Daddies," at the Milane Friday.
Charlie has won a solid place in the esteem of movie fans the world over, and it was he, along with Charlie Chaplin, and other celebrities who put the name of Mack Sennett on the film map.
Murray has since graduated from that famous comedy lot and is under a long term contract to First National from whom he was loaned to play one of the feature roles in "Sweet Daddies."

THE GREATER GLORY
(Advance Notice)
A side of the war that has been clouded in mystery is brought to the screen for the first time in "The Greater Glory," the colossal screen epic showing at Milane Theater Thursday.
The picture was produced by June Mathis, who formerly gave the screen "The Four Horsemen," remembered as a priceless achievement. First NAtional releases "The Greater Glory."
That the story of "The Greater Glory," which reveals conditions in Vietnam before, during and after the war, is authentic is revealed in the fact that the picture is an adaptation of the celebrated novel, "Viennese Medley," written by Edith O'Shaughnessy, wife of the American minister at Vienna. 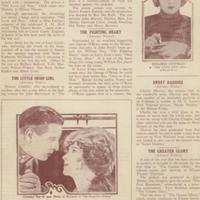