Newspaper article on the upcoming entertainment showings at the Milane Theatre for the week of July 24, 1926. Shows included Mantrap, Eve's Leaves, and Ranson's Folly.

Copyright to this resource is held by Sanford Today and is provided here by RICHES of Central Florida for educational purposes only.

The thirtieth birthday of the Motion picture will be observed this year throughout the United States in the second Greater Movie Season Celebration, sponsored by the Motion Picture
Producers and Distributors of America, of which Will H. Hays is president.
One of the documents which testified as to the national importance of the Greater Movie Season Celebration of last August was an endorsement from President Coolidge, who wrote:
"My attention has been called to the fact that you are taking the twenty-ninth anniversary of the moving picture industry as as occasion to inaugurate a Greater Movie Season Campaign. Such a movement to emphasize the desirability of worthy motion pictures will be of real public value.
"The progress that has been made in both education and entertainment in this tremendous enterprise is an outstanding achievement of the opening years of this Century. I congratulate you and wish you a continuation of your success."

'MANTRAP'
(Advance Notice)
Perry Marmont has always wanted to go canoeing in the Canadian woods. Marmont is English, and ever since having been in America, he has heard of the glories of summer camping. But he has never managed to do it.
"The first autumn I planned to go," says Marmont, "I was suddenly in the position of finding my vacation canceled.
"Then late one February, my boss told me I was at last going to realize my ambition--he was sending me to the Canadian wods. But it was for a snow picture! Everything was white and the thermometer stood at about fifteen below while I was there.
"The next summer I didn't get a vacation." At last, however, Marmont has gone canoeing. He is featured in "Mantrap," the picturization by Director Victor Fleming of Sinclair Lewis' latest novel, which the Milane presents on Monday.
The story is laid in the Canadian woods. The location where "Mantrap" was actually taken was at Little Bear Lake in the San Bernardino Mountains of Southern California a lake-and-woods country, teeming with rivulets and fish. And Marmont's role made him spend most of his time in a canoe. In fact, even when not acting, he was generally to be seen on the water.
"It's almost as good as the North lands," says Marmont, "and at any rate I'll be an expert paddler when I do get to Canada."
Clara Bow and Ernest Torrence are also featured in "Mantrap."

'EVE'S LEAVES'
(Advance Notice)
Hong-Kong has it all over Paris on the matter of creating fashions, according to Leatrice Joy. For heavy silk trousers, such as the Chinese girls wear in her latest starring picture, "Eve's Leaves," have made such a favorable impression on Leatrice that she predicts the adoption of feminine pants as everyday wear by women within a few years.
Miss Joy laughs at those who are alarmed at the present drift of women's fashions toward masculinity.
"We are only getting back to normalcy," declares this attractive star. "The Chinese have been dressing their women in trousers for centuries, and their ancestors were civilized when America's were cliff-dwellers. We are just catching up with their idea that clothes are primarily for the comfort of the wearer. After wearing a boy's costume for two weeks I realize the advantage men have had over us for so long."
In "Eve's Leaves," which shows on the Milane screen Tuesday, Leatrice wears a pair of blue dungarees, a flannel shirt, and "sneakers"--a costume which is quite in harmony with her extreme boy-bob.
William Boyd plays opposite the star, while Robert Edeson and Walter Long have also have excellent roles. Elmer Harris wrote the adaption for "Eve's Leaves," which was directed by Paul Sloane.

"Ranson's Folly," billed at the Milane for Thursday, is the first picture Dick Barthelmess has mad eon the Coast in over seven years.
"Ranson's Folly" was filmed at the Marshall Neilan Studio under the direction of Sidney Olcott. Colonel George L. Byram, a retired U.S. Army expert, superintended the costume and military detail.
In this picture Dick plays the role of Lieutenant Ranson, which was made famous on the stage by Robert Edeson. This is the second Edeson stage play Dick has selected for the screen, the other one being "Classmates."
"Ranson's Folly" is an adaptation of the famous story by Richard Harding Davis. It
(Continued on Page Six)

For trimming of autumn and winter modes, fur will be used to a great extent in the form of medalions rather than bands.
__________________
Mrs. Leverne Hurt entertained the Sisters Club and three extra tables at bridge Wednesday afternoon, honoring Mrs. James Higgins and Mrs. L.B. McCloud, of Tampa. Ferns and roses where used throughout the rooms where the tables were spread for play.
A lively game was played, and when the dainty tallies were collected Mrs. C.R. Kirtley was found to hold high score among the club member and was presented some lovely lingerie. As consolation prize. As consolation prize Mrs. J.G. Sharon was given a pretty pair of silk hose. The honor guests, too, were presented with silk hose.
Punch was served throughout the afternoon by Miss Julia Higgins and Miss Mary Hurt and Miss Rose Hurt presided at the bowl. After the game refreshments of green and white block ice-cream and cakes are served.
The club members present at this delightful party were Mrs. C.R. Kirtley, Mrs. Percy Mero, Mrs. Braxton Perkins, Mrs. M.S. Wiggins, Mrs. Ernest Householder, Mrs.Floyd Palmer, Mrs. Ralf Wight and Mrs. Leverne Hurt. Mrs. Hurt's guests included Mrs. L.B. McCloud, Mrs. James Higgins, Mrs. Frank Milteer of Ft. Myers, Mrs. Edward Higgins, Mrs. J.G. Sharon, Mrs. Benda, Mrs. Henry Wight, Mrs. F.J. Gonzalez, and Mrs. Frank Miller.
________________
Brightly colored jackets will replace the sweater as a sport garment. These are especially attractive in duvetyn, velveteen, or flannel.
__________________
Mrs. R. C. Maxwell was hostess at the bridge Wednesday morning, honoring her house-guests, Miss Ida Nabers of Vernon, Texas, and Miss Eloise Waite of Senatobia, Mississippi.
Decorations of blue and gold were used very artistically on the porch where the card tables were. After the game pretty covers were placed on the tables and sandwiches, punch and candy were served.
The guests of honor received dainty bottles of perfume.
Mrs. Maxwell's guests were Miss Ida Nabers, Miss Eloise Waite, Miss Carmeta Barber, Miss Emily Griffin, Miss Lenabelle Hogan, Miss Lettie Caldwell, Miss Gibbs, Miss Claire Zachry, Mrs. James Jackson, and Miss Jean Maxwell.
____________________
Pocketbooks and bags of fur will be noticeably in evidence, by recent London forecasts.
__________________
Mrs. W.J. Thigpen and little daughters Kathryn and Jane have returned from Daytona Beach, where they spent the months of June and July.
_____________________
Mr. and Mrs. H. C. Nables entertained on Tuesday evening at a reception honoring Mr. and Mrs. Pardyce Russell, whose marriage was
(Continued on Page Five) 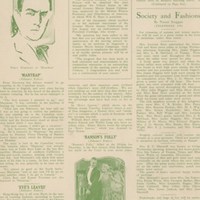