Divas on the Halfshell

Divas on the Halfshell

A poster for the Orlando Gay Chorus concert, "Divas on the Halfshell". The event was held at the now defunct Tupperware Convention Center, located at 14901 South Orange Blossom Trail in Orlando, Florida, on March 22, 1997. The show was directed by Aubrey Connelly and featured performances by special guests Jacqueline Jones, Carmella Marcella Garcia, Denise Russell, Anne Smith, Bryce Ward, and Kathy Spring. The poster features artwork by Gary Gessford and Windon S. Newton depicting a variety of female artists and performers standing on a half shell. A black panel at the bottom of the page contains information like time, location, and the OGC header. 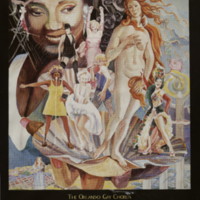