The Fight For the Right 2B

The Fight For the Right 2B

Orlando Gay Chorus Presents "The Fight For the Right 2B"

A poster for the Orlando Gay Chorus concert tour "The Fight For the Right 2B". The event was held in three Florida cities: Orlando on February 19, 1994, Jacksonville on February 26, 1994 and Pensacola on April 9, 1994. The show was directed by Dr. Charles Callahan. The poster features artwork depicting a variety of colorful figures arranged in a triangle beneath the tour's title. A black panel at the bottom of the page contains information like time, location, and the OGC header. 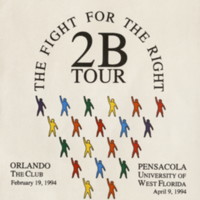