A program for the Orlando Gay Chorus' Pride Month concert, "Family of Friends", on June 12 &
13, 1993, at the Civic Theater Complex, Loch Haven Park in Orlando, Florida. The program includes short biographies on Music Director Dr. Charles Callahan and Accompanist Ken Thompson, II, a brief history of the GALA Choruses, program notes, an outline of the show's itinerary and a list of chorus members. It also contains various advertisements and an invitation for an event at the Parliament House Orlando. 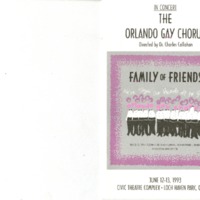 A Gershwin Medley; AIDS Outreach Fund; Alleluja from the Brazilian Psalm; Carry Me; Charles Callahan; Civic Theater Complex; Everybody Says Don't; family; Family of Friends; GALA Choruses; GLBT; In the Miracle; In This Moment; It Don't Mean a Thing; Kenion A. "Ken" Thompson, II; LGBT; LGBTQ+; Loch Haven Park; OGC; Orlando Gay Chorus; Precious Lord, Take My Hand; Send in the Clowns; Set Down Servant; The Great Peace March; The Silver Swan; To Love and to Be Loved; We Start Today; We the People; Where the Bee Sucks