A program for the Orlando Gay Chorus' concert, "Encore, Encore!", on June 19 &
20, 1999, at the Annie Russell Theater at Rollins College in Winter Park, Florida. The program includes short biographies on the Music Director Aubrey Connelly and the Accompanist Kathy Slage, program notes, an outline of the show's itinerary, a list of chorus members and contributors, and a history of GALA Choruses. It also includes a season subscription and two ticket stubs to the show. 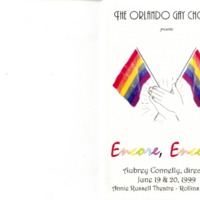