Straight Up With a Twist, First Unitarian Church of Orlando

A program for the Orlando Gay Chorus' concert, "Straight Up With a Twist", on March 26 &
27, 1999, at the First Unitarian Church of Orlando in Orlando, Florida. The program includes short biographies on the Music Director Aubrey Connelly and the Accompanist Kathy Slage, program notes, an outline of the show's itinerary, a list of chorus members and contributors, a donation pledge and a history of GALA Choruses. 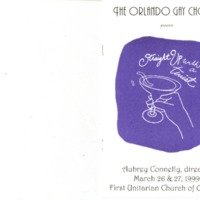