A Marvelous Party, Darden Theater at the Orlando Science Center

A program for the Orlando Gay Chorus' concert, "A Marvelous Party", on March 23 &
24, 2002, at the Darden Theater at the Orlando Science Center in Orlando, Florida. The program includes short biographies on the Artistic Director Terry Thomas and the Accompanists Genoa Minga and Tim Hanes, program notes, an outline of the show's itinerary, a list of chorus members and contributors, and a history of GALA Choruses. It also includes one ticket stub. 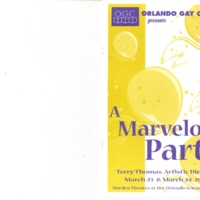 A Marvelous Party; A Salute to Broadway; Anything Goes; At the Same Time; Brand New Day; Darden Theater; GALA Choruses; Genoa Minga; GLBT; I Don't Remember Christmas; I Feel a Song Coming On; I'm Ready Now; Java Jive; LGBT; LGBTQ+; Love Don't Need a Reason; Make Them Hear You; OGC; Open Wide Your Eyes; Orlando Gay Chorus; Orlando Science Center; Our Love is Here to Stay; Paul R. Ericson Memorial Fund; Poison Ivy; President's Address; Since I Fell for You; Sometimes When We Touch; Terry Thomas; That Great Come and Get It Day; The Way That I Wanna Touch You; Tim Hanes; Tuxedo Junction; Well, Did Ya E'vah