A program for the Orlando Gay Chorus' concert, "A Midnight Clear", on December 13 &
14, 2003, at the Annie Russell Theater at Rollins College in Winter Park, Florida. The program includes short biographies on the Artistic Director Terry Thomas, the Accompanist Genoa Minga, and the ASL interpreters Patricia Clifton, Lee Moody and Paul Rutherford, program notes, an outline of the show's itinerary, a list of chorus members and contributors, and a history of GALA Choruses. It also features biographies of the special guests: Malikah Burroughs, Chuck Davis
Lisa Ferrigno, and Darcel Stevens. 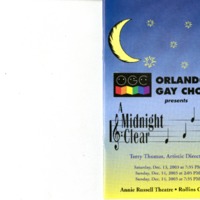