A program for the Orlando Gay Chorus' concert, "Don't Touch That Dial", on April 8 &
9, 2006, at the Margeson Theater at the John and Rita Lowndes Shakespeare Theater in Loch Haven Park in Orlando, Florida. The program includes short biographies on the Artistic Director Terry Thomas, the Assistant Artistic Director Michael McKee, the Accompanist Dr. Suzanne Hatcher, and the ASL interpreters Kevin Harrington, Christy Reynolds, and Elizer Sierra, program notes, an outline of the show's itinerary, a list of chorus members and contributors, and a history of GALA Choruses. It also includes a 1-page pledge. 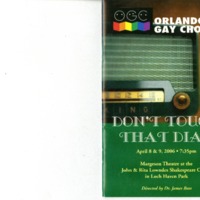