Bringing Down the House, CityArts Factory

A program for the Orlando Gay Chorus' concert, "Bringing Down the House", on March 31 &
April 1, 2007, at the CityArts Factory in Orlando, Florida. The program includes short biographies on the Artistic Director Mark W. Hardin, the Arranger in Residence James F. Konkel, the Accompanist Absalón Figueroa, the ASL interpreters Eliezer Sierra, Debbie Drobney, program notes, an outline of the show's itinerary, a list of chorus members and contributors, and a history of GALA Choruses. 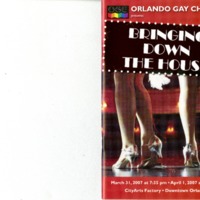