From Crayons to Perfume, The Plaza Theater

A program for the Orlando Gay Chorus' concert, "From Crayons to Perfume", on June 23, 2007, at the Plaza Theater in Orlando, Florida. The program includes short biographies on the Artistic Director Mark W. Hardin, the Accompanist Absalón Figueroa, the ASL interpreters Eliezer Sierra and Debbie Drobney, program notes, an outline of the show's itinerary, a list of chorus members and contributors, and a history of GALA Choruses. 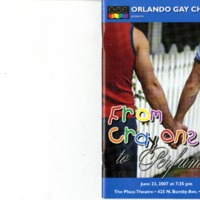 A Mother's Love; Absal; Absalon Figueroa; Candle on the Water; Debbie Drobney; Eliezer Sierra; From Crayons to Perfume; GALA Choruses; GLBT; Help Is On the Way; In Whatever Time We Have; Kiss the Girl; LGBT; LGBTQ+; Manly Men; Mark W. Hardin; OGC; One Night Only; Orlando Gay Chorus; Some of My Best Friends Are Straight; Something Inside So Strong; Takin' Him Home to Meet Mom; The Ones Who Aren't Here; The Plaza Theater; The Road That Led Us Here; The Way of the Heart; To Sir, With Love; When You Say You Love Me; Why We Sing; With a Little Help From My Friends