Oz & Beyond: The Music of Harold Arlen, The Plaza Theater

A program for the Orlando Gay Chorus' concert, "Oz &
Beyond: The Music of Harold Arlen", on June 20 &
21, 2009, at the Plaza Theater in Orlando, Florida. The program includes short biographies on the Artistic Director Jim Brown, the Assistant Artistic Director Jedediah C. Daiger, the Choreographer Claudia Asbury, Accompanist Sue Glerum, the ASL interpreters Eliezer Sierra and Debbie Drobney, program notes, an outline of the show's itinerary, a list of chorus members and contributors, and a history of GALA Choruses. 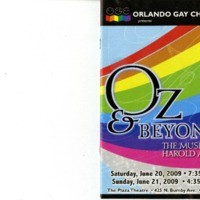 Ac-centchu-ate the Positive; Between the Devil and the Deep Blue Sea; Blues in the Night; Claudia Asbury; Come Rain or Come Shine; Debbie Drobney; Down with Love; Eliezer Sierra; Get Happy; GLBT; Harold Arlen; Hit the Road to Dreamland; I Had Myself a True Love; I Love a Parade; I Love to Sing-a; I've Got the World on a String; Jedediah C. Daiger; Jim Brown; LGBT; LGBTQ+; OGC; One for My Baby; Orlando Gay Chorus; Over the Rainbow; Oz & Beyond; Paul R. Ericson Memorial Fund; Stormy Weather; Sue Glerum; Sweet and Hot; That Man That Got Away; That Old Black Magic; The Plaza Theater; This Time the Dream's on Me; Wizard of Oz