We're Ready For Our Close-Up, The Plaza Theater

A program for the Orlando Gay Chorus' concert, "We're Ready For Our Close-Up", on May 18 &
19, 2013, at the Plaza Theater in Orlando, Florida. The program includes short biographies on the Artistic Director Jim Brown, the Assistant Artistic Director Jedediah C. Daiger, the Principle Choreographer Bob Smith-Trent, Principle Accompanist Sue Glerum, the Principle ASL interpreter Debbie Drobney, program notes, an outline of the show's itinerary, a list of chorus members and contributors, and a history of GALA Choruses and the Orlando Gay Chorus. 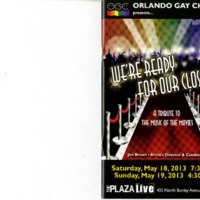 (I've Had) The Time of My Life; A Love That Will Never Grow Old; As Time Goes By; Axel F; Beautiful City; Bob Smith-Trent; Cinema Italiano; Debbie Drobney; Footloose; GALA Choruses; Get Happy; GLBT; God Help the Outcasts; Happy Days Are Here Again; Hooray for Hollywood; How Could You Believe Me When I Said I Love You, When You Know I've Been a Liar All My Life; Jai Ho; Jedediah C. Daiger; Jim Brown; LGBT; LGBTQ+; Listen; Medley from Mary Poppins; Moon River; Night Fever; Nine to Five; OGC; Orlando Gay Chorus; Over the Rainbow; Paul R. Ericson Memorial Fund; Streets of Philadelphia; Sue Glerum; The Bare Necessities; The Pink Panther; The Plaza Theater; The Rose; The Way We Were; The Wizard of Oz; Think Pink!; We're Ready for Our Close-Up; You Haven't Seen the Last of Me