A letter dated March 31, 1997, from the director of the Museum of Florida History, Gaye Guita, to Delee Perry. In the letter, printed on Florida Department of State letterhead, Gaye Guita invites Delee Perry to attend the opening reception for an new exhibit about Florida's film heritage at the Museum of Florida History on April 6, 1997. This exhibit featured and was dedicated to the memory of Perry's father, Newton "Newt" Perry, and Guita thanks Perry for her assistance with the exhibit.

Perry worked as a lifeguard, public school principal, coach, swimming and scuba diving instructor, and Ocala city pool manager. He opened Perry's Swim School in 1955, and taught more than 120,000 individuals to swim during his career. Perry was inducted into the Florida Sports Hall of Fame in 1981. Perry's daughter Delee Perry took over Perry's Swim School following her father's death in 1987, and it was still in operation as of 2020.

Originally created by Gaye Guinta and published by RICHES. 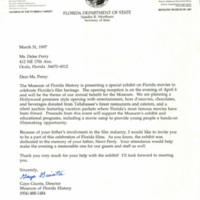