A signed photograph of Eileen Perry Hogshead, the daughter of Newton "Newt" Perry, aged fourteen, as a Weeki Wachee Mermaid. The photograph was taken by Newton Perry around 1950. On the reverse of the photograph is a hand-written caption by Newton.

Perry worked as a lifeguard, public school principal, coach, swimming and scuba diving instructor, and Ocala city pool manager. He opened Perry's Swim School in 1955, and taught more than 120,000 individuals to swim during his career. Perry was inducted into the Florida Sports Hall of Fame in 1981. Perry's daughter, Delee Perry, took over Perry's swim school following her father's death in 1987. It was still in operation as of 2020.

Originally created by Newton "Newt" Perry and published by RICHES. 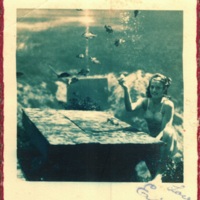 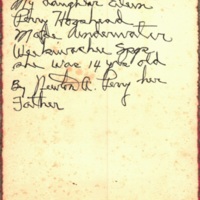