A photograph of an underwater filming scene showing Newton "Newt" Perry in a diving helmet at an underwater camera, some time between 1950 and 1970. This photograph may be either from Weeki Wachee Springs State Park or from Newton "Newt" Perry's career as an underwater filmmaker.
Newton "Newt" Perry was born in Valdosta, Georgia in 1908, and moved with his family to Ocala, Florida in 1922. He was a member of the swimming and diving teams at the University of Florida. Perry earned the nickname "The Human Fish" for his performances of underwater stunts in advertising clips and film shorts, and acted as a swim double for actors in movies and TV shows, including Johnny Weissmuller as "Tarzan." Perry also advised filmmakers filming underwater scenes at Silver Springs, Wakulla Springs, and Weeki Wachee Springs, and developed a system for breathing underwater using an air compressor and hose, which was used in the 1948 film "Mr. Peabody and the Mermaid" and during Weeki Wachee Springs' mermaid shows.
Perry worked as a lifeguard, public school principal, coach, swimming and scuba diving instructor, and Ocala city pool manager. He opened Perry's Swim School in 1955, and taught more than 120,000 individuals to swim during his career. Perry was inducted into the Florida Sports Hall of Fame in 1981. Perry's daughter Delee Perry took over Perry's Swim School following her father's death in 1987, and it was still in operation as of 2020.
Along with a group of investors, Newton Perry opened Weeki Wachee Springs to the public in October of 1947, and used his experiences working at Silver Springs and Wakulla Springs to develop the original concepts for its underwater theater and mermaid shows. Perry sold his stake in Weeki Wachee Springs in 1950. After peaking in the 1950s and 1960s, attendance began to decline as theme parks and highways changed the dynamics of Florida's tourism. The State of Florida took over the attraction as a state park in 2008. Since then, the park has focused on appealing to a modern audience while preserving its history. 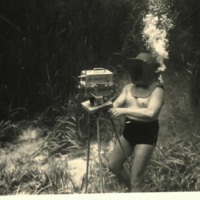