Stock Letter for Those Interested in Becoming Weeki Wachee Springs Mermaids, sent to Becky Young in 1972

Stock Letter for Those Interested in Becoming Weeki Wachee Springs Mermaids, sent to Becky Young in 1972

A typed stock letter sent to Becky Young in 1972 alongside an application for a position as a mermaid. The letter is typed on Weeki Wachee letterhead, which has an image of two performers in a pose underwater as the background. Signed by the Mermaid Supervisor Genie Young, the letter thanks applicants for their interest in the position and gives an overview of the job description and pay schedule. The letter ends asking applicants to send the application and a photograph of themselves back to Genie Young.

Copyright to this resource is held by Becky Young and is provided here by RICHES for educational purposes only. 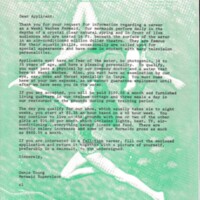