A typed note on card stock the size of a business card sent to Rebecca Young from Weeki Wachee Springs, requesting her to come by for an interview. Text reads, "Rebecca: Come up as soon as you can for water test and pre-employment interview." The name of the person who sent the note is obscured.

Copyright to this resource is held by Becky Young and is provided here by RICHES for educational purposes only. 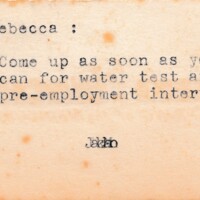