Courtesy Admission Ticket to Weeki Wachee Springs, given to Rebecca Young on February 20, 1973

A courtesy admission ticket to Weeki Wachee Springs, good for one free viewing of an underwater show. The ticket was given to Rebecca Young (then Rebecca Stalhart) on the day of her pre-employment interview and water test, February 20, 1973. Rebecca was interviewing for a position as mermaid 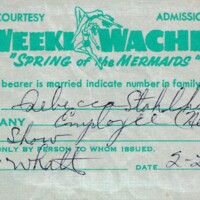