A newspaper article published on February 22, 1973, in the Marshalltown Times-Republican announcing Rebecca Young's (then Rebecca Stalhhut) employment as a Weeki Wachee Mermaid. The article reads, "Becky Stahlhut, a mid-term graduate of Marshalltown High School has been accepted to swim as a mermaid in the world famous Spring of Live Mermaids at Weeki Wachi [sic], Fla. She was a member of the MHS girls swim team, synchronized swim group, intructor and life guard at the YMCA and on the Y swim team. Becky is the daughter of Mr. and Mrs. Ron Stalhhut of St. Petersburg, Fla., formerly of Marshalltown."

Newspaper article cut out and taped together.

Originally created by Marshalltown Times-Republican, owned by Rebecca Young, and published by RICHES.

Copyright to this resource is held by the Marshalltown Times-Republican and is provided here by  RICHES for educational purposes only. 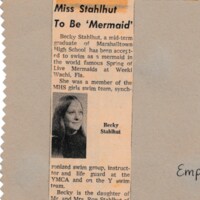