Originally created by Genie Young, owned by Rebecca Young, and published by RICHES. 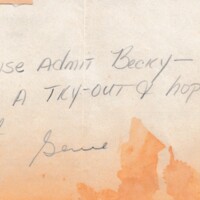