A three-page document given to mermaid Geanie Brooks detailing updated pay rates for Weeki Wachee Mermaids, effective August 1, 1956. The document expresses that the pay increase was made in order to attract better performers and better retain current staff. Mermaids were still going to be paid per show, and still required to take promotional photos and photos with visitors for no additional pay. Under the new rules, mermaids were going to be paid $2.30 per unit. The pay per unit would increase ten cents every month a mermaid performs until it reached the maximum rate of $4.70. Performing a show equaled one unit, and performing extra duties qualified mermaids for exta partial units. There were other ways to make money at Weeki Wachee, including training new mermaids. When a trainee performed their first show, the trainer would recieve $100. If the trainee didn't qualify, the trainer received $25. Trainees were paid $75 a month, plus room and board. After passing training, they would become extras in shows. In this position, they would make $170 a month. When a position of mermaid opened up, the extra who had been an extra the longest would move up. Mermaids received double pay for working on holidays. 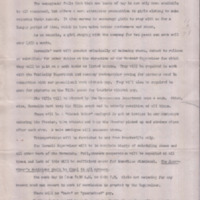