Three strips of safety film with twelve photographs showing Arlene Brooks in several ballet positions. The photographs are assumed to be taken by Weeki Wachee's resident photographer, Sparky Schumacher. These photos were taken in the 1960s. Practicing moves out of the water is just as important as practicing moves underwater.

Originally created by Sparky Schumacher, owned by Arlene Brooks, and published by RICHES. 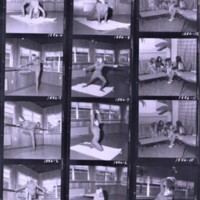