Rita King, a Mermaid at Weeki Wachee Springs, Dancing at a Mermaid Reunion, 1960 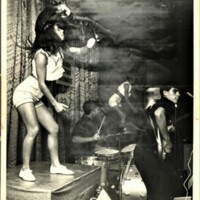