Choreography of the Acrobatic Routine Rita King, then Rita McKenna, performed at a Weeki Wachee Springs Reunion in 1960

This document lists the choreography of the acrobatic routine Rita King (then Rita McKenna) performed at one of the Weeki Wachee Springs Mermaid Reunions. This event was one of the many mermaid reunions that Weeki Wachee Springs hosted, where they invited former mermaids to attend special events. This particular reunion happened on December 1, 1960. Text cut off at the top of the image reads, "Acrobatic Dance Routine for a Mermaid Reunion Show - Age 21." 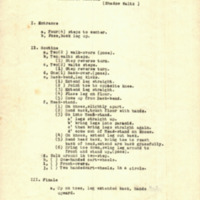