For many years, Weeki Wachee Springs held an annual reunion with their former mermaids. The 1969 reunion schedule gives an overview of the events held throughout these reunions, including a swimming race across the spring, an underwater show performed by former mermaids, a lunch, costume contest, award ceremony, film screening, and farewells. 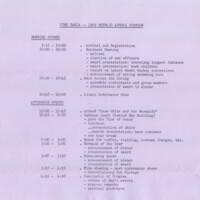