"Weeki Wachee Calling" is a 4-page pictoral report of the 9th annual Weeki Wachee Spring's Mermaid Reunion. The first page is written as if it is a telegram and thanks guests for attending as well as informing them of the next reunion in 1970. Over the next 2 pages are 15 photos from the event along with the winners of all of the games and contests that were held during the event. The last page lists the attendance roster. A totall of 130 participated in the event. 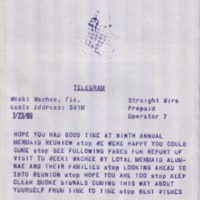