Photograph of Weeki Wachee Mermaid Lauren Dodson Posing on a Dock in Costume, 2007.

Copyright to this resource is held by Lydia Dodson and is provided here by RICHES for educational purposes only. 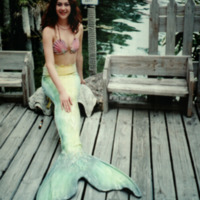