Photograph of Florence McNabb posing underwater in a mermaid costume at Weeki Wachee Springs in the 1950s. Florence was the daughter of Ed and Vera Gothberg, who owned the Mermaid Motel that was across the street from Weeki Wachee Springs until 1966. At this time, mermaid tails were mainly used in promotional photos and rarely used during shows. This was because shows at the time mainly consisted of ballet routines. 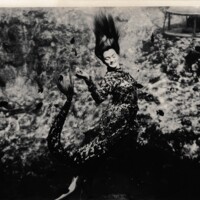