Black and white photograph of Florence McNabb, husband Charles McNabb, and their two sons, Michael and David, leaving church. Florence is shaking their minister's hand. Florence McNabb was a Weeki Wachee Mermaid in the 1950s. Her husband also worked at Weeki Wachee. They married in 1951. In 1963, the McNabb's car was struck by a drunk driver, killing Florence and Michael and severely injuring Charles and David. Decades later in 2006, someone picking debris out of the Weeki Wachee Springs found an anklet with "Florence" engraved on one side and "Charlie" engraved on the other. Former mermaid and co-worker of Florence McNabb Vicki Smith confirmed that Florence had lost the anklet during a show. Years later, a friend of David McNabb found a large box of Weeki Wachee emphemera and family pictures when he helped to clean out David's home after David passed away. This friend passed the box on to his daughter, who donated the artifacts to Friends of Weeki Wachee Springs State Park. 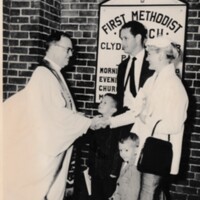