Postcard depicting three Weeki Wachee Mermaids performing in a show. Two of the mermaids are dressed up in leis and hula skirts and the other is wearing a Hawaiian shirt playing a ukelele. Mermaids are standing on a metal platform that is a hydraulic lift. The platform moved up and down. 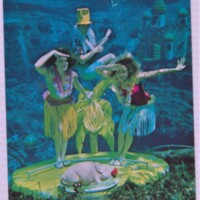