Photograph of the Volkswagen Van that Bussed Employees to the Springs, c. 1950s

Photograph of the Volkswagen van that Weeki Wachee used to bus employees to the springs. The van is parked in from of the Weeki Wachee entrance sign. 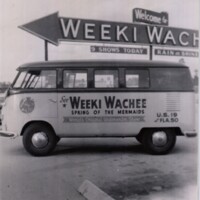