Map of Weeki Wachee after ABC Bought the Attraction

Map of Weeki Wachee after ABC Bought the Attraction

Map of Weeki Wachee Springs and All its Attractions, c. 1970s

This map is a part of a booklet about Weeki Wachee Springs. The booklet was made sometime after the corporation American Broadcasting Company (ABC) purchased the park. The map also shows the underwater theater, labeled D, as having a flat roof. This remodel covered up the original clam shell roof the theater had. In the mid-1970s, the park was rethemed and many of the attractions took on a South Pacific look. In 2014, the Florida Department of Environmental Protection began an endeavor to uncover the original roof. 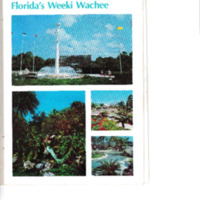